Best Job Quitting Scenes For The Perfect Revenge! Here Are Some…

We all enjoy catharsis. For those who don’t, you don’t seem human. Now catharsis is good for your own good. It gives you a sort of release outlet for all those emotions you bottled up. Movies provide you that opportunity to release all those emotions.

So when you get excited about the hero beating up the villain, it means you have desires giving it to people who have troubled you. But since you cannot actually go and beat people up – because such people aren’t worth wasting our time in jail and also it is illegal- you get pleasure by watching such things virtually.

Even when you cry while watching a break-up scene, you do so because not only are you touched by it but because you have wanted to cry before and this seemed the legit reason so that people won’t question you. But let’s not go down the sad road. I am more interested in dealing with scenes that give you sheer pleasure because of the crudeness and rawness. Therefore here I am to present before you the best job quitting scenes.

What is oft thought…

We have all thought about quitting our jobs at some point because you weren’t happy with your boss or your salary. It could also be that the office environment was too competitive and you needed something that wasn’t so demanding. Another reason for quitting could include annoying and jealous coworkers. The best part about ”thinking” of quitting the job is that you are free to imagine anything about how you would do it.

Hollywood has spoilt us enough to make us want to quit our job in an ideal way. And there is nothing wrong in dreaming about it. In fact, I am here to help you dream of the best way to quit your job. And as you read, please note that I used the word “dream”. I urge you not to go ahead and do any such things because as I mentioned before- such people aren’t worth wasting our time in jail or remaining Forever Unemployed.

Best job quitting scenes in store for you

So here you go. I looked around and found a few films that incorporated scenes where they show how an actor quitting his/her job. To tell you the truth, they do stir up the evil pleasure – of getting at your boss – in me too.

For those who have quit their jobs, you must have gone out quietly without much ado. But at the back of your mind, you might have wanted to shout and take a good revenge at your boss. It’s a good way to leave work quietly, no doubt. This way, you know that no one will come behind you to get any revenge. Anyway, this list is for all those who have had the chance to live the dream but couldn’t, or, want to live the dream but can’t.

The film stars one of my all time favourite actor Kevin Spacey. Playing the character of Lester Burnham, he wishes to leave his 14 year old job in order to take charge of his life. So while he is doing the task of leaving his job, he does so by writing an evaluation letter. The letter states how he felt that he was residing in hell and spilled his apathy for the job. The same letter also states how he preferred to retire to restrooms and fantasize about a life that was not as hellish as his job. It just doesn’t stop there. He takes it to the next level when he blackmails his boss to give him a massive severance packet. At the end he does get away with a severance packet and the contentment of screwing the boss.

Jennifer Aniston starrer film, Office Space comes second in line with its legendary job quitting scene where she quits her job. The film deals with some employees who were really tired of their job but only one of them took the initiative to go ahead and resign. Joanna, played by Aniston, is unhappy when her boss compels her to wear flairs over her uniform. When he goes ahead to discuss it, enraged, she replies how she does not need 37 pieces of flair to express herself and gives him the bird stating that ‘that’ was her flair. She finally stated in a frustrating tone how she hated her job and that she did not require it anymore. Seems so satisfying and complete! In his face! Wink wink! 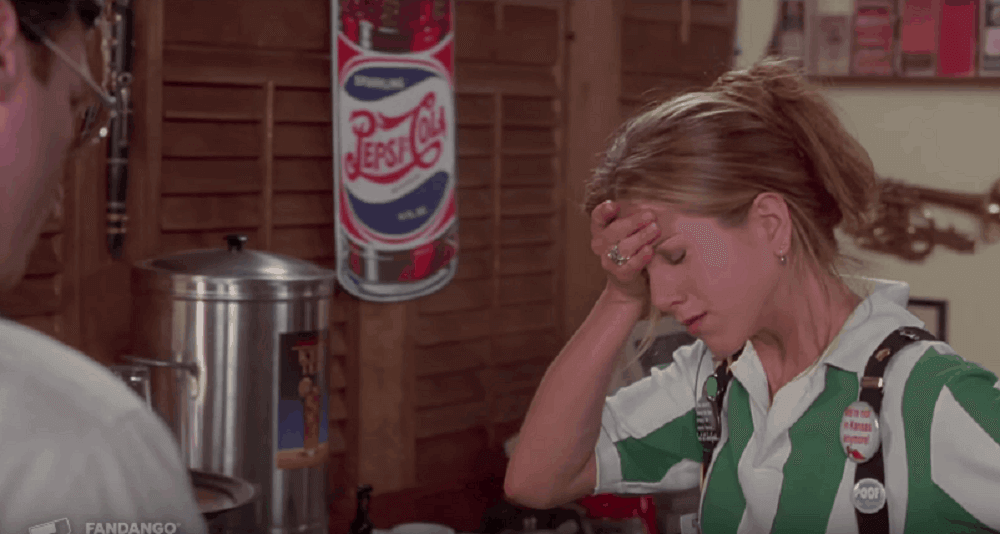 The scene is one of my favourites but then I would never suggest anyone to go through such physical pain. So after the boss calls on Edward Norton for evaluation, Norton threatens his boss that he would expose their company’s secrets. This blackmail results in him getting fired. The best and worst part starts now. So Jack starts hitting himself, landing punches on his face and then when the police enters, he gives up, making it look as if the boss did it. But that is not all, the reason why this is one of my favourite job quitting scenes is because he ends up getting his pay checks and around 40 flight coupons. Isn’t it the best way to get fired, eh? You leave your job, shame your boss and get paid in the end.

Fight, fight till you succeed.

If you are working in the media sector and your senior or boss is someone who is usually live on air, then this sort of revenge is something that could satiates your thirst to seek red revenge. John Mahoney plays an unbearable boss to Winona Ryder. There comes a point where she could just not stand him and so goes ahead to sabotage his reality talk show. She adds words to his script that could be the end of his career.

She tampers with his cue cards which states how he finds young women amusing. The guest on the show is also taken aback and Ryder finally gets the last laugh after her revenge on her boss was successful. For a boss as wicked as Mahoney, he had it coming. And the satisfying part about the scene is when Ryder laughs and smiles her heart out. And this is the sole reason why Reality Bites makes it to the list of best job quitting scenes. 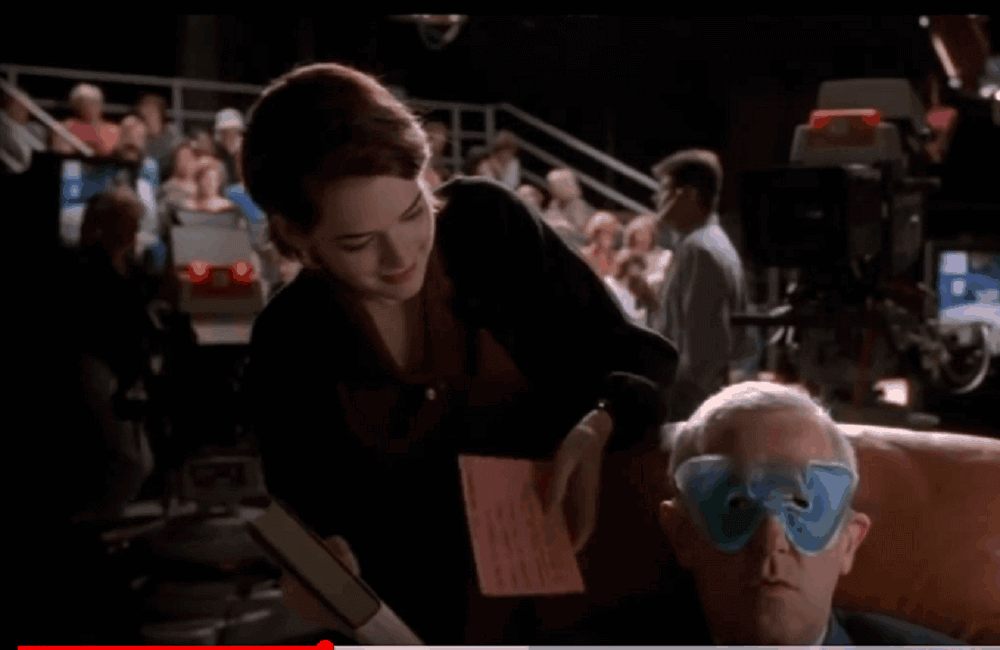 This tops my best job quitiing scenes list. The movie does a good job of showing how frustration at work places can be. James McAvoy, who was constantly nagged by his boss, one day screamed aloud in the office asking her to keep quiet. The boss is shocked and everybody in the office stop doing their work peeking at what was going on. He then goes ahead and tell her how he understands her nature and for a minute she feels loved but when he finally ends his monologue by asking her to jerk off, her reaction is something that is priceless. And the scene does not end there.

You know how we have those annoying co-workers whom we’d love to bash up. So while leaving, McAvoy goes ahead and slams the computer keyboard on his colleague. You can even see the sad chap’s tooth flying in slo-mo. Since this tops my list, I saved the best for the last. 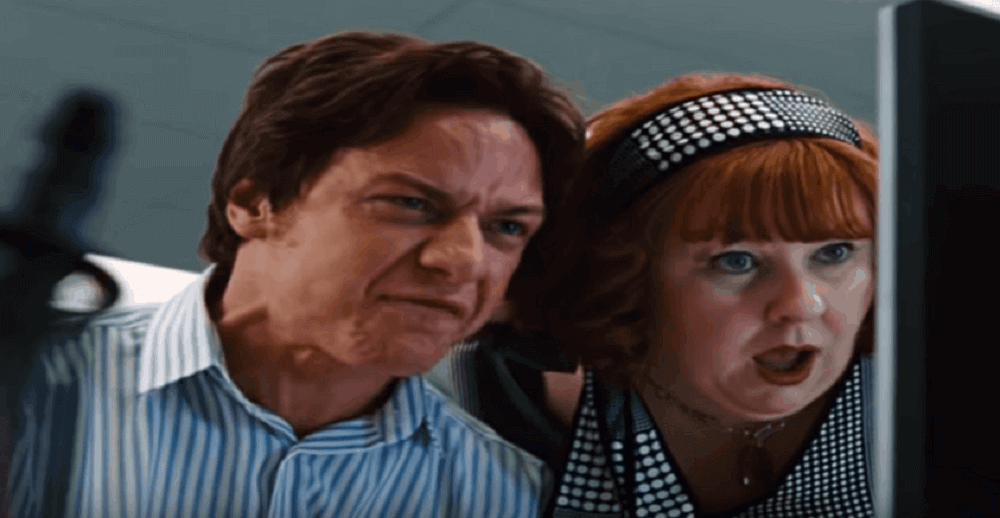 She asked for it! One of the best job quitting scenes.

I hope these best job quitting scenes were cathartic enough. Now that you feel refreshed and rejuvenated, I suggest you get back to work. If you ever feel like leaving your job, it is advisable to do it normally by writing a letter. If your boss has really been a jerk, you don’t need to shame him on national television. Nor in the office where everyone can see you taking your sweet revenge. You can always report to the HR or your boss’s senior – if any. And if you really want to go out in style, then the best way would be like Anne Hathaway in The Devil Wears Prada. I know it’s not as exciting but never going back to work and keeping your boss guessing also works fine enough.

Anna Verasai
Anna Versai is a Team Writer at The HR Digest; she covers topics related to Recruitment, Workplace Culture, Interview Tips, Employee Benefits, HR News and HR Leadership. She also writes for Technowize, providing her views on the Upcoming Technology, Product Reviews, and the latest apps and softwares.
« Embrace Happiness To Avoid Negative People
Don’t Follow The Herd, Be Heard In A Meeting »