In 2017 the UK government made it mandatory for employers with 250 or more employees to publish their gender pay gap report on their respective public-facing websites. This report must be submitted to the government online. In accordance with the law, the UK’s largest architectural practice, Foster + Partner has disclosed its gender pay gap in staff salaries.

The statistics clearly spot the gap as the females are paid 10.5 percent less per hour than their counter partners. This figure is based on the median of the staff salaries – the standard way of comparing payroll between firms. The gap widens when calculating the mean average of hourly pay, that is, 23.8 percent times.

A similar result is reflected while analyzing the difference in bonus payment. The bonuses paid to women are 33 percent times less than that of men when calculated on median method. The mean value of the bonus is 72 percent. The Practice has reasoned it to be the result of recruitment of women employees in the later part of the year 2016/2017. As according to the company policy, an employee is eligible for a bonus once he/she has completed 6 months service by review date.

How to Measure Gender Pay Gap

The median is the figure that falls in the middle of a range when everyone’s wages are lined up in descending order. The median gap for gender pay gap is the difference between the midpoints in the ranges of men’s and women’s hourly pay rates. Hypothetically, if the midpoints of the men’s wage value and women’s wage value are £100 and £89.5 respectively, then the median value of gender pay gap at the company is 10.5 %.

The mean, is calculated by adding up the hourly pay rates of all employees and divide the figure by the number of employees. The mean gender pay gap is the difference between mean male pay and mean female pay. So, if the hourly gender pay gap at a company is 23.8%, then for every £100 earned by a man a woman would earn £76.2.

However, interpreting the gender distribution data at the Practice reveals a bigger picture. Foster + Partner has only one woman employed among its 29 senior management team comprising executive managers, senior executive partners and senior partners. The firm defended that the pay disparity is more about gender diversity in the top positions rather than equal pay for equivalent job roles. 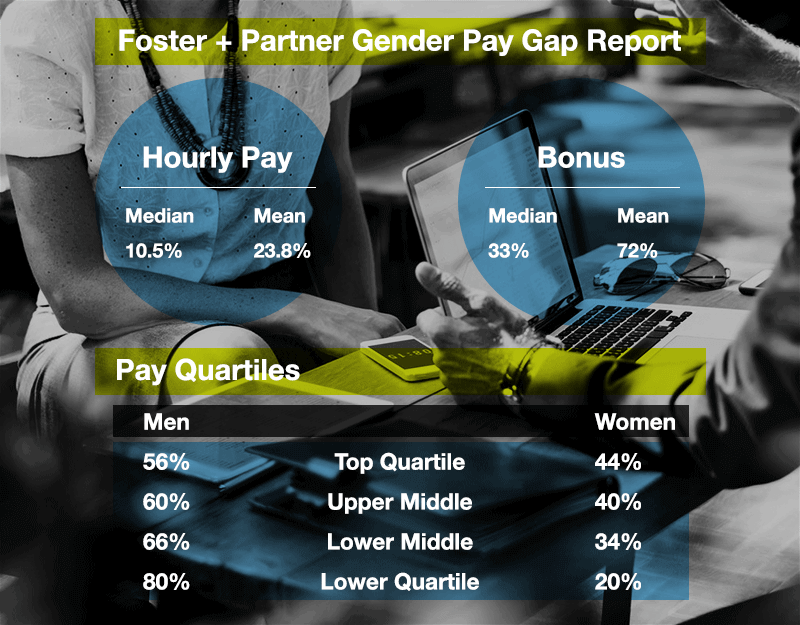 The median is a better representative figure as the mean can be skewed by a few highly paid employees as happened in the case of Foster + Partners. A large difference between the mean and the median pinpoints the inequality at either end of the pay spectrum. However, usually the disproportion is most distinct at the peak of the pay scale.

The managing partner, Matthew Streets has mentions explicitly that the gender pay gap issue is complex. To address it, the Practice has to look for gender diversity and more inclusion on at all levels. The process will take some time to get achieve the right balance.

Eventually, the public unveiling of the gender pay gap would definitely see some fiery spark in the business world. In the long run, this initiative could be a revolutionary step towards breaking ‘glass ceiling’ and achieving ‘equality’.