Home > Strategy > Interviews > How to Spot Lies in a Resume

How to Spot Lies in a Resume

With the average number of applicants for job postings growing every day, candidates are devising means of making it through without their actual reputations – by telling lies in their resumes. A recent survey at Robert Half Company showed that almost half of job seekers lie in their resumes, according to the Fast Company Magazine.

It can be very expensive to employ candidates based on how smart they are with lies, but the challenge is how to spot a lie on a resume. First, there are common resume lies you should look out for while looking out for lies in a resume. They include: 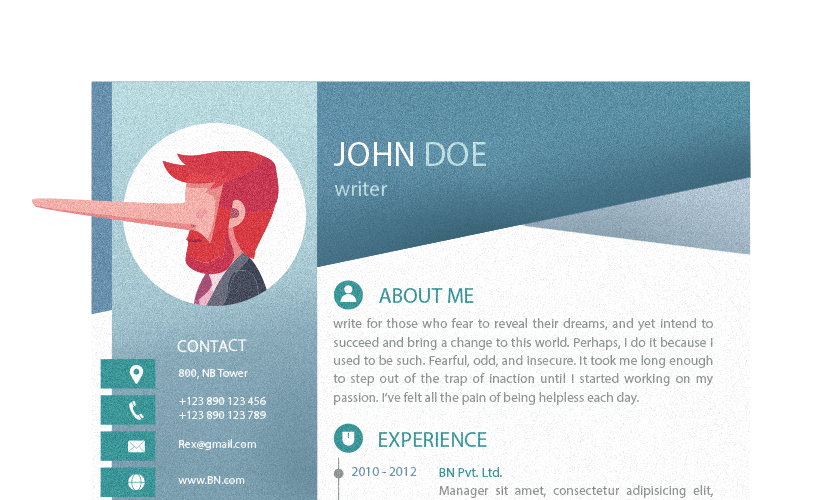 The common resume lies mentioned may appear very subtle and difficult to identify, while some are very obvious if you have the techniques on how to spot lies in a resume.

Here are the red flags (Spot Lies in a Resume) to look out for.

In a very few cases, this is an error. But the truth is your reference to knowing the truth lies here. When some dates are not having months; just year to year duration, the candidate could be trying to hide something there. Perhaps, job gaps or just to make the duration to appear longer than the real period. Also, there may be something fishy when start and end dates did not align correctly. Just find out what happened between those dates, it could be an error or your lead to the lies.

Those who would boldly state that they have attended an institution may make things difficult, but some will still leave the space just to mislead you subtly. When the candidate fails to specify the type of degree earned, HR Professionals need to investigate more to know if the candidate actually attended the institution. It could be a short certificate program or they didn’t graduate from the school.

Candidates can claim to have an experience they don’t have by simply including them in their job description even when it did not tally with the claimed position. This is a red flag, try to find out more if the candidate makes it to the interview stage and be sure to verify the information using the references.

Some candidates who have worked for firms contracted by big companies may say they have worked for those big companies without stating how they did. “I’ve seen young lawyers put that they were a contract attorney for a top 100 firm, but they actually weren’t employed by the firm as a contract attorney. They were employed by [an intermediary firm] who is really the true employer that has assigned this young attorney to a project to work at the big firm,” says attorney and career branding expert Wendi M. Weiner. “What happens is by putting that you are a contract attorney for the actual named law firm, you’re lying.”

Lies in a resume can range from minor exaggeration to a complete fabrication of credentials. Each should be reviewed distinctively before they can be discovered. Clearly lying about degrees not acquired is on a different tone with omitting dates to hide employment gaps.

Diana Coker
Diana Coker is a staff writer at The HR Digest, based in New York. She also reports for brands like Technowize. Diana covers HR news, corporate culture, employee benefits, compensation, and leadership. She loves writing HR success stories of individuals who inspire the world. She’s keen on political science and entertains her readers by covering usual workplace tactics.
« A STEP BY STEP GUIDE to Conduct an Employee Appraisal Meeting
My Coworker Picks Nose At Work. It Irks Me Out; I’ve Literally Gagged in the Office. »