Home > Resources > Education > What’s It Like To Have The Most Right-Swiped Jobs On Tinder?

What’s It Like To Have The Most Right-Swiped Jobs On Tinder?

If you dreamt of becoming a pilot as a little boy, you were on the right track dude. Turns out, some professions are considered more attractive when it comes to online dating; suggest a report from world’s largest dating app – Tinder. Tinder declared its list of most right-swiped jobs for both men and women.

Back in November 2015, Tinder started including a column in user’s profile where they can display their profession and education information, extracted directly from their Facebook profile. The list of most right-swiped jobs for men and women were created using users’ data (only profiles within the United States) from November 2015 to January 2016.

As reported by the company, including any job in user’s profile can increase the probability of getting swiped to the right. Rosette Pambakian, Vice President of communications and branding says, “This extra layer of information offers deeper insights into the users.” However, there are certain jobs that are considered sexiest profession on Tinder compared to others.

Here is a list of most attractive jobs on Tinder for men as well as for the ladies: 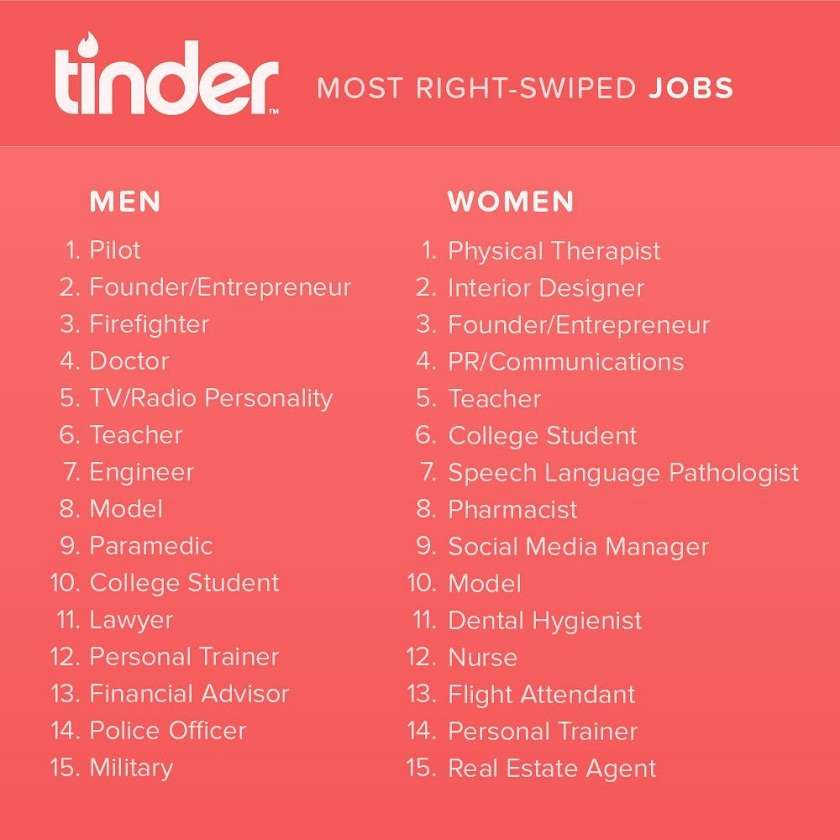 The dating app that claims to make more than 25 million matches in a single day revealed that profession and education were the most requested features on user profiles.

Looking at the list of the sexiest profession on Tinder, it is clear that both the genders have differing tastes when it comes to dating a person from a particular profession. If you are a male, your Tinder game is supposed to be really strong if you are a man with wings (pilot), on the other hand, if you are a female, you need to be good at taking care (physical therapist) of your partner.

Some of the common professions among both the lists that proved to be likable no matter the gender included entrepreneurs/founders, models, personal trainers, and of course college students.

To hear from people who were highly liked on Tinder, we talked to some of the men and ladies who had one of the most right-swiped jobs to know if the report really states the truth. Here’s what we came to know from them:

THE MAN WITH THE WINGS

We talked to Matt Reid, a pilot to know if he gets a lot of right swipes on the popular dating app.

So Matt, Tinder says pilots get the most right swipes, what could be the reason behind this?

Matt: Women are attracted to men who aim high and are fearless. Being a pilot requires high skills just like being a doctor or lawyer, but pilots seem to be a lot more fun and adventurous than doctors.

So it’s the uniqueness that holds the charm?

Matt: Yes, definitely. You don’t come across a lot of people who can fly high in the sky. Not only women, anyone I meet gets wowed as soon as they come to know about my profession.

Would you prefer to date pilots over any other profession?

Matt: Are you kidding me? Hell yeah. It is much easier to connect with someone who has a common interest as you. And as pilots, we can better understand fellow pilots. Flying is my passion, and dating someone with the same passion would be amazing.

We talked to Emma Sheffield, an Interior Designer to know if men are attracted to women from her profession.

Why do you think are interior designers on the second spot among the most attractive professions?

Emma: I guess guys like women who are creative. As interior designers, we are not someone who will bore you with geeky talks. Or maybe they just want us to renovate their stupid apartment!

Do guys assume that you would be good looking because you make the interiors look so good?

Emma: Yes, that happens all the time. It completely makes sense, we have a different taste and that makes us easy to spot or differentiate.

Well, the Tinder report seems to be true. So, if you are yet to pick your career, don’t forget to have a look at the hot jobs list.

Anna Verasai
Anna Versai is a Team Writer at The HR Digest; she covers topics related to Recruitment, Workplace Culture, Interview Tips, Employee Benefits, HR News and HR Leadership. She also writes for Technowize, providing her views on the Upcoming Technology, Product Reviews, and the latest apps and softwares.
« Best Email Apps To Manage Emails like a Pro
Dealing With Different Types of Narcissists at Work »