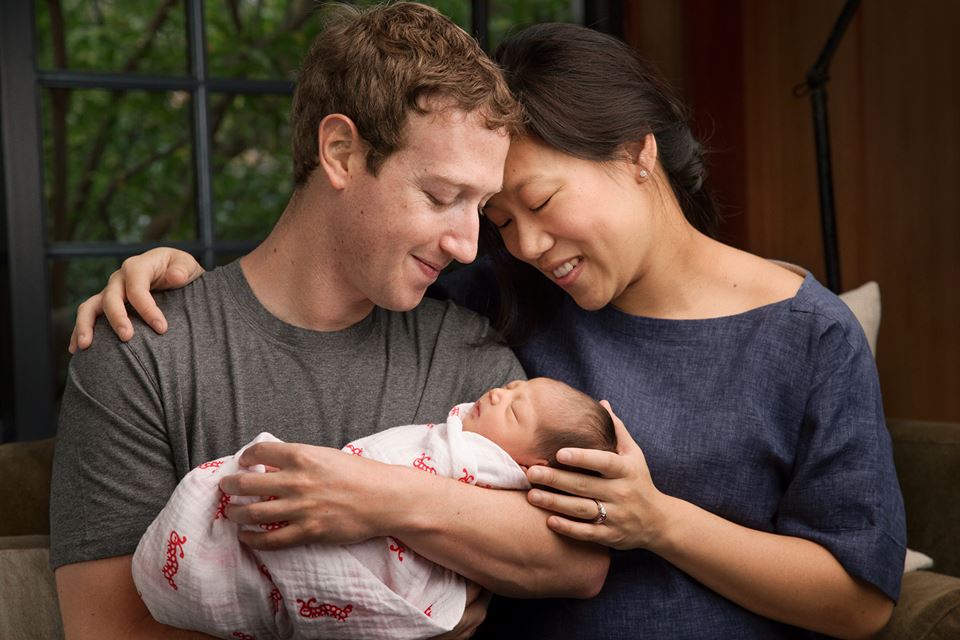 Max Zuckerberg, the newborn baby of Facebook CEO Mark Zuckerberg and wife Dr. Priscilla Chan has been striking the news months before her arrival. From Virtual reality to Paternity Leave to Huge Donation, everything father Mark Zuckerberg did manage to grab eyeballs all over, along with leaving a great impression of him on people as well as his employees. Zuckerberg recently made a splash everywhere by announcing his plans for two months of paternity leave after his baby’s arrival. This is a step forward in Facebook workplace culture, as it symbolizes how workplace needs to be more family-oriented. The most important matter is not what the Facebook CEO plans to do in his paternity leave of next two months but in the upcoming years after that. The main over-nagging issue is raising a child is quite opposite to just having a child, for both working men and women, whether they are a CEO, some manager, or junior level employee. It is not some sort of temporary inconvenience, which requires the right amount of ‘Fixed’. The real opportunity for Facebook Chief Executive is to start innovating how individuals can work in different manners, even in executive positions, so when the time comes, the do not have to choose between their work and family. This is one of the most significant issues for the future of the corporations in America. To this end, Zuckerberg might like to take some motivation from Paul Ryan, House Speaker, who refused to take back his position for leadership unless he could consistently be a great part of upbringing in his children’s lives. The transition of the workplace into more livable one is very important for building a successful organization and encouraging employee engagement through positive work environment. Unfortunately, nowadays there exists only one model of leadership, which eventually prizes a work ethic on a 24*7 basis. But, what leaders need to understand is, it doesn’t have to be this way. There are too many creative ways to restructure the work pattern so even the senior most executives can have the variety of options. Jobs can be explained as a projected series, which can be sized to the quantity of time an individual wants to devote at work. Or, a senior executive’s contributions can be calculated from productivity and quality with less consideration on quantity. This type of workplace freedom can allow employees to choose from the things they wish to focus on. It will make a difference to them as well as their organization. These can be judged through work results, not the work time they tend to choose. A true business leader of 21st century leads on much more basis than mere an example. Zuckerberg spending his time with newborn Max Zuckerberg won’t help his company much as spending less time at work means an overload of work for his colleagues. Similarly, taking two months off as paternity leave won’t help any kind of family to balance the work onslaught. The place where he really needs to asseverate his leadership will bring an evolution in nature of work. Pledging 99% of Facebook shares worth $45 billion for philanthropy to honor the arrival of his newborn Max Zuckerberg is not something to continue sneezing at. Instead, his ability to drive a great force by designing a brand new corporate world, which will work significantly for every family, would be the greatest gift Max Zuckerberg will appreciate for her entire life. The responsibilities for leaders can be efficiently divided and distributed in a broader way, which will allow a great matching skills and the job that needs to be wrapped up for a less intense schedule. The dominating idea of round the clock availability of CEOs had laden them with continuous pressure to keep demonstrating how efficient they are to the public. Zuckerberg has taken a remarkable step in the direction to prove this theory wrong. He is proving that CEOs don’t need to work all the time. Perhaps, when he plans his return, he should apply Paul Ryan strategy to make sure he continues to keep himself engaged with his family and set a praiseworthy example for Facebook employees and other folks.