To state the obvious: Microsoft’s LinkedIn acquisition brings a big shift. But, what does it really mean, though? Whether you want it or not, LinkedIn will no longer be the place you go to look for a new job or network with people within your industry. Microsoft envisions a future in which LinkedIn is the ultimate echo chamber of your identity, not Facebook.

The planned acquisition of LinkedIn by Microsoft Corporation potentially is a very classic move. Of course, we’d be hard-pressed to admit that, but that doesn’t change the truth. Perhaps, the skepticism isn’t an unnecessary guest here, as it arrives for a lot of reasons. The price tag of the acquisition, for one. So far, at $26.2 billion, this is the largest acquisition by the software giant in its history of previous acquisitions. The size alone, perhaps, is one of the reasons for the alert, given the checkered history of Microsoft with such large deals. We all do remember, Nokia. Don’t we? Similarly, Yammer Inc., and Skype Technologies designed to pad social and digital credentials, managed little of either.

But, unlike predecessor deals, this deal is never going to fail. In fact, this will succeed where the rest of the deals failed, i.e. registering profit and growth. LinkedIn will boost Microsoft’s HR technology while making the social networking platform even more valuable for HR professionals and recruiters. 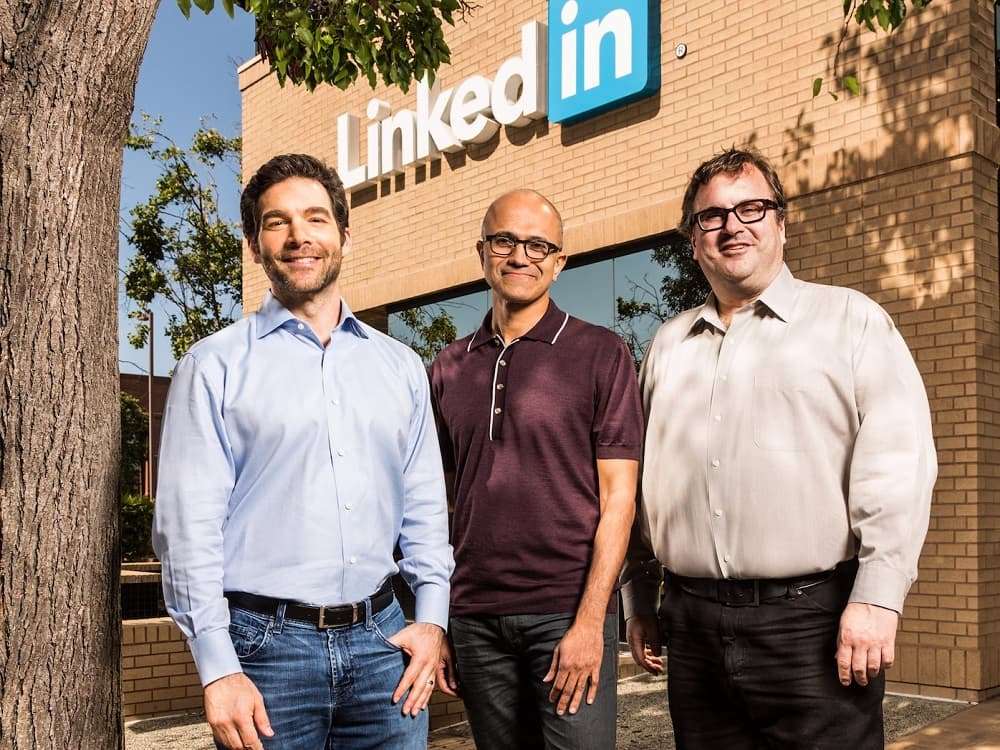 What makes Microsoft so sure of its success this time? Well, surely it’s not overconfidence.

Satya Nadella has certainly learnt some valuable lesson in the time span of serving Microsoft as a CEO. Lessons from Nokia might be the hardest one, which are surely going to last for a lifetime. What it is then? Maybe a treasure chest or secret path to appealing consumers?

The reason is, there lays a real synergy amid products and companies, especially productivity suite of Microsoft Office and the core database of LinkedIn of more than 400M professional profiles. Mr. Nadella has been betting heavily on the fact that these two concepts, which have been reconceived, should be one instead of being two separate ones. “It’s really the coming together of the professional cloud and the professional network,” he says.

The deal between Microsoft and LinkedIn relies on advanced analytics and big data. It’s to create value for clients. The aforementioned subjects are turning out to become increasingly significant in industrial segments like healthcare. The impact of business culture due to LinkedIn acquisition by Microsoft will be very strong.

Microscope plans to inject a fresh layer of immense knowledge into its products by acquiring the user database from the profiles of over 400M job seekers and professionals. The company plans to mine the crude material about networks and backgrounds of employees to seek fresh approaches to making businesses perform in a better way.

As the software giant looks forward to a future, which goes beyond its core software of server and PC, it has placed applications based on the cloud like Office 365 and Dynamics at the center of its strategy respectively. Clearly, it seems Microsoft has made a huge bid to place itself in the center and front position in the life of every professional. Through this deal, the Microsoft is taking on the company, which is dominant in B2B social networking. As a recruiting team of HR professionals, a place to publish online resume, and a sales prospecting tool for enterprise sales reps, LinkedIn can do wonders for Microsoft when it comes to approaching the business and human resource niche.

The 26.2 billion dollar deal has clearly outlined Microsoft’s vision in which an individual’s profile on LinkedIn resides amid the other segments of their professional life, connecting to Skype, Windows, Outlook, and Microsoft Office productivity tools for instance PowerPoint and Excel, among other Microsoft products. A possible integration for Microsoft and LinkedIn is applicant tracking. Indeed, the multi-billion dollar deal will aid Microsoft to witness growth in the HR value chain, and support LinkedIn to coagulate its HR Position. As HR professionals are aware, LinkedIn is certainly a great source of information for collecting valuable information, recruiting, and retention. The acquisition would force HR to think differently about the software giant and what all it does.

Microsoft is seeing LinkedIn as a source to supercharge Customer Relationship Management (CRM) software for identifying and tracking sales leads. Microsoft arrives at fourth place in total market share among the giant CRM players, namely Oracle Corp., SAP SE and Salesforce.com. Salesforce is the dominant of the CRM market, but carries a minority of complex and ill-defined market (sometimes). LinkedIn has LinkedIn Sales Navigator, and more importantly, the data and reach, which any CRM company would crave for.

Access to Every Company’s IT Decision-Makers. Probably, your organization chart is laid out in some fashion on the social platform LinkedIn. Just think about how often sales team of your company scrolls through the website hoping to discover new leads in the perfect hopes that maybe, they’ll stumble upon a name of decision maker, and also, miraculously, discover an unguarded email address. Following this acquisition, Mr. Nadella has got his hands of 433M registered users’ database. Out of these users, some of them have the resources and power to turn a red quarter into a black. Giants like Salesgenie, InfoUSA, and Hoovers whose main mission is to offer lead data to marketing and sales teams will have to compete Mr. Nadella’s company in attracting new clients.

This is not the end of it, in case you’re wondering it is. The internal team of Microsoft will now have an access to these decision makers and names. Anytime the software manufacturer has a new tool or a service, which it wants to peddle to a certain title or industry, it got a breathing, real-time database that it can internally access. Additionally, it can charge its rivals to access the database because let’s face it, the sales team of Google, SAP, Amazon, Oracle, IBM, and all of the other behemoths were probably scanning “Now” Microsoft’s LinkedIn for the purpose of sales leads.

A Leap of Faith

LinkedIn users are, debatably, core demographic of Microsoft. They also offer the software mammoth a significant thing it has long sought, but never had. Yes, we’re talking about a network used by users to identify. Microsoft needs to persuade (or manipulate) the LinkedIn users to use it across as many products from Microsoft as possible and adopt the identity. Access to the users, as well as the massive amount of data, which they throw off, could possibly yield products and insights within Microsoft, which would allow it to monetize its investment in a way LinkedIn does.

LinkedIn, so far, hasn’t evolved with a pace beyond its roots as it was expected as a job-search site and recruiting tool. In fact, most of the users aren’t even looking forward for a job and so far, LinkedIn has done a very poor job of fetching them to drive back to the site regularly to link with and expand their professional network. Hardly about one quarter of 400 million LinkedIn users return to site every month. This, perhaps, offers a big reason why this multi-billion dollar acquisition under the leadership of Mr. Satya Nadella may succeed.

Well, Microsoft is no more a company which it happened to be when it acquired Yammer, Skype or Nokia. No pun indeed! Under Steve Ballmer’s control, the company sought to drive Microsoft users to its stable platforms, Windows is the one. As a corollary, it meant that acquisitions were incorporated with other Microsoft products quickly and development of latest features slowed.

While the buyout of LinkedIn by Microsoft has offered the former’s platform a much-needed fuel for development and growth. Zuckerberg’s ambitious project “Facebook@Work” has received a fiercest and strongest competitor in the field. The project is globally used by 450 companies with thousands of other companies waiting in line to join, though it’s in beta mode currently.

LinkedIn used to be considered as the closest competitor of Facebook@Work, although their offerings were quite different from one another, but soon it lost its touch. Now a strong backing from Microsoft could prove to be very beneficial for the company. Microsoft plans to utilize LinkedIn as an element of social fabric across every Microsoft platform. It’s looking forward to addressing the missing social chunk in its well-established line-up of enterprise products.

Mr. CEO of Microsoft has shown a sheer willingness to interact with users, even if they’ve devices running on Google’s Android or Apple’s iOS. According to the Microsoft Executive, LinkedIn will be offered significant autonomy. This will be similar to how Microsoft handles Mojang – The Maker of Minecraft. Eventually that would result in walking a fine line between synergy and autonomy. The longer the rope, which Mr. Nadella offers LinkedIn CEO, the less advantage there may be to products of Microsoft. But, don’t bet against the CEO of the software giant. If an organization as big and regal as Microsoft can be re-energized by Mr. Nadella, who is to say he can’t weave the same magic to 13-year-old LinkedIn.

Tools & Technology Anna Verasai - December 03, 2021
Let’s try to get rid of the most overused email closings with these alternatives to “warm regards.” ...

Fun Christmas Party Games for Work That You Will Enjoy

How to Talk About Strengths and Weaknesses in an Interview

Interviews Anna Verasai - December 02, 2021
The last thing you want to do during a job interview is to fumble when you’re asked to list strengths and weaknesses. ...

Season’s Greetings: What to Write in Holiday Cards for Clients & Employees

Workplace Culture Anna Verasai - December 02, 2021
Are you wondering what to write in holiday cards for clients and employees? Here are some general – but thoughtful – Christmas g...