Home > Resources > Q & A with Jane > My Coworkers Won’t Stop Skinny Shaming Me. How Do I handle Comments About My Appearance?

My Coworkers Won’t Stop Skinny Shaming Me. How Do I handle Comments About My Appearance?

Skinny shaming can be as harmful as fat shaming. A coworker’s remarks on appearance at work can rise to microaggressions and lead to actionable harassment. Read Jane Harper’s take on how to respond to offensive comments at work.

I lead a small team at a small-sized enterprise. To make Friday a little sweeter, and definitely, a day employees look forward to, we have lunch together. These lunches have turned into a big social gathering as employees of various departments gather in the balcony to eat, chat and mingle. This was a good thing – a very good thing, in fact, and for several reasons until I became the subject of skinny shaming.

Honestly, I get my share of hurtful jibes – remarks on my thin wrists, ankles, and overall negative comments about my appearance. I’ve never taken it personally because I don’t think it means anything. None of this was a big deal to me until a coworker commented that “a chubby woman is a happy woman.” “R,” a member of another team loves to tell people how some women are skinny because they have an envious personality which burns all the fat in their body. Those are the usual and tame remarks, but then she spiced it up with “I was skinny like her a few years ago, but then I became less envious – more happier, and have since put on some weight.” She proceeded to tell us the virtues of a content personality. About 5 minutes into her speech, she looked at me and said something to the effect of “you should learn to be less envious since your body quickly burns all that fat.” Soon, another coworker chimed in.

The HR wasn’t around when this happened. Then again, I don’t think her presence would have mattered as R has commented on my appearance in the past when the HR was around. HR and R are fair-weather friends, so I don’t think I’m going to get any help from human resources.

It’s bad enough that I was called names such as “skeleton” at school and now twenty years later I find myself at the same juncture. When I approached my boss and explained the situation, he laughed it off saying they’re jealous of fit people.

What is your take? This isn’t the first time R has made offhanded comments about my body. It certainly won’t be the last – and I hope, I’m proven wrong. Should I talk to her, or should my boss? 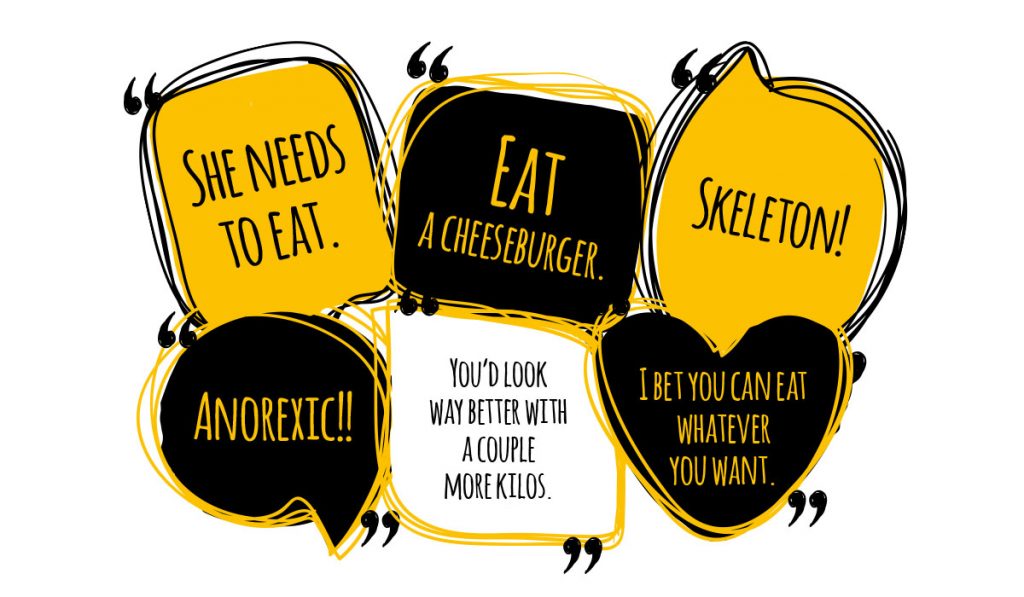 There is no denying that this is a disturbing situation. Comments about appearance at work can certainly and justifiably lead to a trip to the HR. In this case, the HR may have an implicit bias because of her close proximity with R.

Any smattering of highly personal comments about physical appearance at work are both infuriating and demoralizing. As a young woman and a feminist, whose approach to work is guided by principles of inclusion, equality, and fairness in the workplace, I find these sort of comments nothing more than an attempt to undermine one’s authority and devalue their input in the workplace.

The first step is to decide whether it’s worth addressing the skinny-shaming.

You’ll certainly draw attention to the comment and put the other person on the defensive. If you don’t learn to speak up, you’re essentially giving R the permission to do it again. This might also be a learning opportunity for her as she might not realize that commenting on a coworker’s physical appearance at work is not OKAY.

The cost of speaking up…

The stakes are higher because you’re in a position of power. As a manager, you have a responsibility to make sure no one in your team feels threatened or uncomfortable at work. Before that, you need to consider who you’re dealing with, what their reaction might be, and what the costs will be if you speak up.

They might easily dismiss your concern (“It was just a joke!”) or get defensive (Are you accusing me of skinny-shaming?”). Ask yourself: “How does this person handle confrontation? Are they self-reflective?”

Explain how their comments on your appearance make you feel. “I know it wasn’t your intent, but your comment made me feel uncomfortable.” Follow the initial statement with a question. “What did you mean when you said that…” or “What information are you basing that on?”

This should prompt them to self-reflect, as well as give them a chance to take it back.

That’s not to say you shouldn’t speak up. If you feel you might get pushback while addressing the coworker’s offensive behavior. You can educate them by offering more information. For example, if R suggests that you’re skinny because you have an envious personality, you might say something like: “I read an interesting study the other day that found that our genes provide the code for how our body functions, and can have subtle or dramatic changes on features such as hair, eye color, and even body weight. Fat people are found to have a higher genetic risk score than skinny people, which contributes to their risk of being fat. On the other hand, thin people have a much lower genetic risk score, i.e. fewer genetic variants that increase their chances of being overweight.”

If the comments about your appearance continue, you should consider escalating the issue.

The brutal and straightforward answers to HR-related queries and concerns. Send in your queries with the subject line ‘Ask JANE HARPER’ at info@thehrdigest.com

Jane Harper
Writer. Human resources expert and consultant. Follow @thehrdigest on Twitter
« Paul Wolfe, SVP And HR At Indeed On How To Create A Positive Work Culture
Which GOT Character Defines Your Personality? »