My exposure to office jargon was when as a rookie sub to a well-known editor on a financial daily, I was asked to give a report ASAP. And ignorant me hesitantly asked him what it meant. He looked at me as if I had grown another head and patiently explained the acronym to me.

In my work life I have realized that like fashion, certain phrases and acronyms find favor in the workplace cyclically. They are used and overused by each and everyone to show how “in’ they are with the office jargon. But repeated use of some words and phrases can get boring and sometimes even irritate.

My pet peeves are: A level playing field, paradigm shift, plus ça change, matching synergies, bandwidth, and of course ASAP.

A study conducted by OnePoll and Jive Communications, surveyed 2000 Americans on their communication in the office and collected some oft-used phrases that sound cringeworthy.

Topping the list was “Give it 110 percent.” Followed by “think out of the box.” “Hammer it out” was another offender.

‘Can I borrow you for a sec’ was found to irritate a large number of people. 13 percent found it frustrating, and 41 percent said it was overused. Oh! and if you thought using some catchphrases like “teamwork”, ‘how long is a piece of string?’ , “move the goal post” and “win-win” will set the ball rolling in a meeting (pun intended), then you are wrong.

The overuse of these catchphrases is sure to set some teeth grinding and eyes rolling. 94 percent of those surveyed said that they were exposed to this kind of office jargon almost daily. 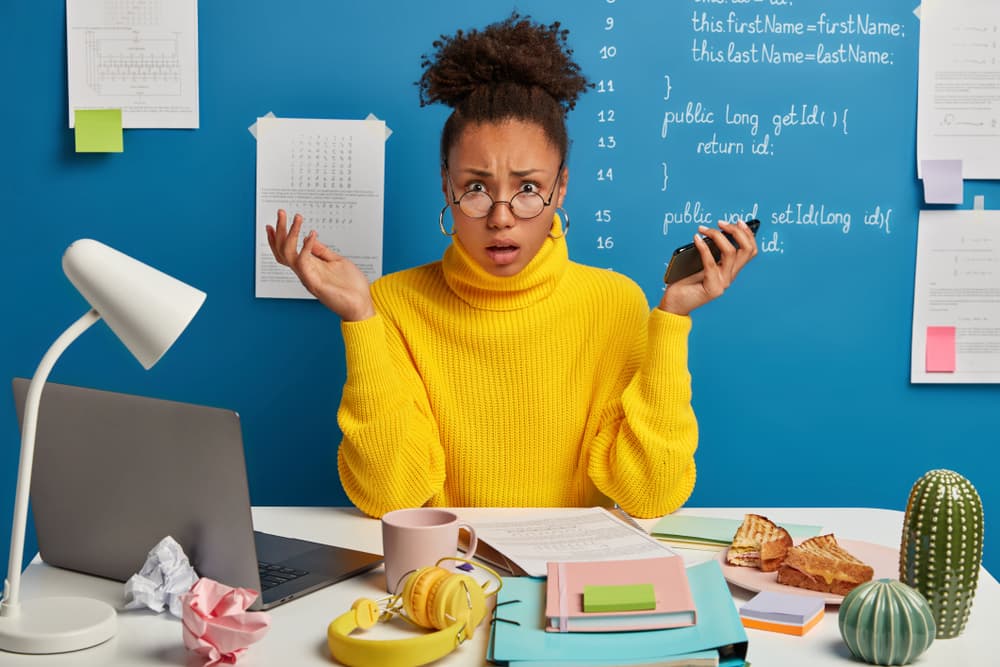 ‘Can I borrow you for a sec’ was found to irritate a large number of people. 13 percent found it frustrating, and 41 percent said it was overused.

The funny part is, some of the workplace catchphrases did not make sense to a lot of the people surveyed, and they were not aware of the meaning. Some thought “Dial up” meant make a phone call rather than pushing things a little higher.

“What’s the red thread?” was interpreted as what is the risk? rather than looking for a constant or consistency. Interestingly, “Let’s take it offline” was taken to mean as let’s have a meeting face to face rather than let us discuss it in private after a meeting.

Considering how there is a unique text language now floating into our conversation it is natural that some of them are accepted as part of official discussions. Here is a list of messaging text that is used in everyday conversations in the office, according to the OnePoll survey.

We did our own survey around the office to find out what sets some people’s teeth on edge. Bandwidth was an all-time favorite.

I am sure not all the phrases given above upset people equally. And it would be unfair to ask people to stop using them completely.

But what we can do is not use these office catchphrases to explain away all situations.

I have attended meetings where leverage has been thrown about like a football—to leverage software, to leverage bandwidth (I was lost here), to leverage the network. A simple “use” instead of leverage would have done the same job better. I don’t have the bandwidth can easily translate to time or resources.

The point here is to keep things simple. By peppering your talks and meetings with such jargon is not going to make it sound more officious. You are bound to lose your audience. Misplaced and over usage of office catchphrases opens you up to ridicule too.

Workplace Culture Anna Verasai - October 24, 2021
Explore these virtual and in-office Halloween party ideas that will connect your team from wherever they may be! ...

Mastering A Career Change After 50

Recruitment Anna Verasai - October 23, 2021
We still live in a world where you’ll face hurdles if you’re looking for a career change after 50. Here are a few tips that’ll help yo...

Outsourcing Anna Verasai - October 22, 2021
The rise of the gig economy is helping companies tap a skilled, agile workforce. So, what is the gig economy? Who are the gig workers and ho...