Home > Featured > Race Against Bias: Are We Aware of Our Own Unconscious Bias?

Race Against Bias: Are We Aware of Our Own Unconscious Bias?

Unconscious bias is hard-wired into our brains. It’s a survival mechanism, so basic and below our conscious radar. It helps us better sift through the constant stream of information to make accurate decisions based on instinct rather than logic. What’s more, everyone harbors them and takes them into the workplace. In fact, studies demonstrate bias across nearly every organizational activity and for nearly every group of people. The question is: Are we aware of our own unconscious bias? As plainly evident the word is, bias only becomes dangerous when people reject discriminatory ideas without recognizing the root of it.

Unconscious Bias is not evil

The brain function usually trick your intuition into making three blunders: underestimating resources, overestimating threats, and underestimating threats. Scientists have determined that unconscious bias is found in the same region of the brain (the amygdala) associated with fear and threat. From a survival standpoint, bias serves a purpose. It is a product of our encounters from childhood to adulthood – both what you experienced yourself and saw others experiencing around you – and cannot be unlearned. This information is ready to be deployed, whether by a scowl across the meeting room or by visuals of two people whispering in a corner. We perceive through habit, bias, expectation, and assumption. The heuristics that guide us through the day are full of unconscious, predictable biases.

We convince ourselves that our decisions are “rational,” but in reality, most human decisions are made emotionally from our sense of comfort or discomfort. Take, for instance, implicit bias which activates and includes emotions or feelings when we meet a member of a certain social group. Five times each second, the brain non-consciously determines what is positive and dangerous and the strongest responses are to avoid what is perceived as unrecognizable or dangerous. Human brain can be threatened by the five domains of social experience: status, certainty, autonomy, relatedness and fairness (SCARF – David Rock, 2008).

Numerous studies since the 1980s confirm that unconscious bias is in play in every aspect of the modern workplace – in client relations, mentoring and sponsorship, performance management, recruitment and retention, promotion, and the allocation of job assignments. The first step to addressing unconscious bias in the workplace is to acknowledge that it can be done by offering awareness training. Leaders at PricewaterhouseCoopers, for example, go through awareness training.

For companies seeking to implement a workplace-wide awareness training, however, it is important to find out the kinds of unconscious bias and their influence on a person or group’s behavior. This can also help organizations fuel the conversation about what biases are present on a macro-level in the company and what steps the organization as a whole can take to minimize them. 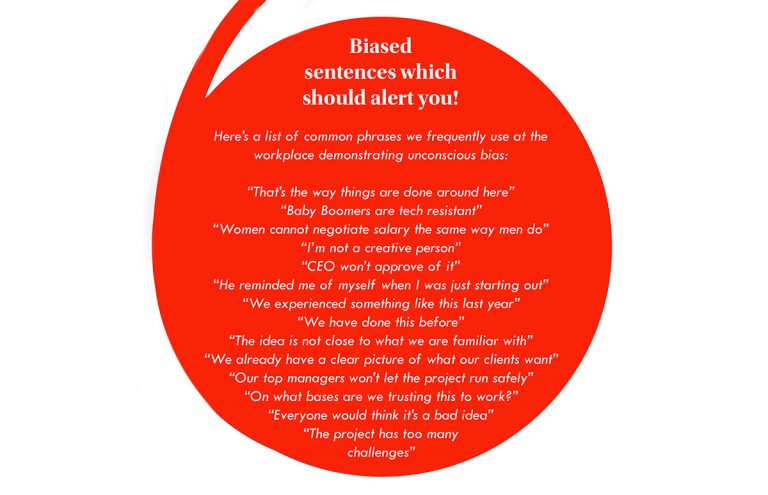 The tendency to favor innovative ideas coming from authority figures within innovation teams. Take yourself into account. Whatever you as a manager, say will carry more weight than others’ concept, idea or opinion.

The tendency to favor options in which the probability feels familiar. Most people choose a regular paycheck over the untrodden path of a business venture.

There is an expression for anchoring bias or focalism – “Not seeing the forest for the trees.” When you focus on a specific piece of information or are pre-loaded with information, the rest of your surroundings can get blurred out. If we fixate on an initial piece of information to make subsequent judgment during decision-making, we become emotionally attached to it for the stability of forming a conclusion.

A form of groupthink which prevents individuals from thinking independently. It is often linked to authority bias. Ask yourself: Are you favoring ideas just because other teams do them too?

The tendency to take cues for proper behavior from the actions of others rather than exercising our own free will and judgment. For example, when a group to which you own loyalty to seems to be making an ethical decision, you try to balance your loyalty to the group by acting against your own ethical integrity.

Rather than seeking out objective facts, favoring information in a way that it confirms preexisting beliefs or preconceptions.

To falsely assume when two sequential events occur one must have caused the other.

To be influenced by the way in which information is presented rather than the information itself. For example, when judging an idea: are you judging the content or the delivery?

The tendency to prefer avoiding losses even when the fear of loss isn’t justified. Let’s take an example: That last piece of pie in the office. How do you feel when you have it, in comparison to how bad do you feel when someone else does?

New ideas and innovations are seen as inherently good, regardless of the potential negative impacts.

Overestimating the degree to which future tastes or preferences will match current consumer preferences.

Risk-avoidance by favoring current state of affairs. When changes do occur, people tend to perceive them as a detriment.

The tendency to knowingly understating the costs and overstating the benefits. Organizations teams often understate the true costs of concepts, business model prototypes, and ballpark figures in order to get a project approved by the management.

Unconscious bias is a part of human nature. In some, it’s visibly evident. In others, it’s hard to distinguish. When you are able to identify your bias, you are able to effectively challenge them and make better decisions for favorable outcomes. Adopting a new way of thinking demands commitment and acceptance that there are ways beyond what feels normal and comfortable.

bias in the workplaceUnconscious bias

Priyansha Mistry
Currently editor at The HR Digest Magazine. She helps HR professionals identify issues with their talent management and employment law. | Priyansha tweets at @PriyanshaMistry
« Improve Your Presentation Skills With These Effective Ways
Paul Wolfe, SVP And HR At Indeed On How To Create A Positive Work Culture »