Many believe racial training programs the corporate version of, “But I have a black friend”. While some say unconscious bias training at work would accomplish little other than protecting corporates from potential liability in lawsuits. Starbuck’s latest controversy exposes the two Americas we live in: one, where the social media is making the world more divisive, and the other where companies are striving become more progressive by reviewing their policies to bring people together.

On Tuesday, Starbucks CEO Kevin Johnson announced his plan to close every company-owned U.S.-based store on May 29 to provide its employees with racial-bias training. This also means that in the future, if an employee is racist to a coworker or customer, Starbucks isn’t legally liable for the racism.

How did we come this far?

Last weekend, two black men were led out of a Philadelphia Starbucks for sitting at a table. The ensuing scene was recorded in a video that has been viewed more than 10 million times on Twitter. There was more to it.

When you look at it from a compliance perspective, you’ll find that Starbucks wasn’t in the wrong.

First and foremost, the manager who called the police on two Black men who refused to buy anything and wanted to use the restroom. Let’s not forget that there is a problem with stores located in large cities where the public only comes in to use the restroom and nothing else. Naturally, it is the retail employees that have to clean the restrooms, and they’re not equipped to handle this situation like municipal facilities. Unless coffeehouses reserve the restroom for customers, it becomes impossible to keep up with the cleaning and restocking of restroom supplies, which set a precedent for more customer complaints regarding the cleanliness of the place.

Secondly, the company instituted a policy that enabled the manager to call the police on two men who were loitering in the store. Everybody knows that humans often loiter inside the coffeehouses with a five-hour coffee to tap into the free Wi-Fi. However, the manager had the discretion to ensure the policy was enforced, and thus she called the cops after informing the two men about the 911 call.

What is inexcusable is that the CEO didn’t realize that a policy stating ‘the restrooms are for paying patrons only’ could lead to inevitable situations like this where the dialogue would shift towards color. 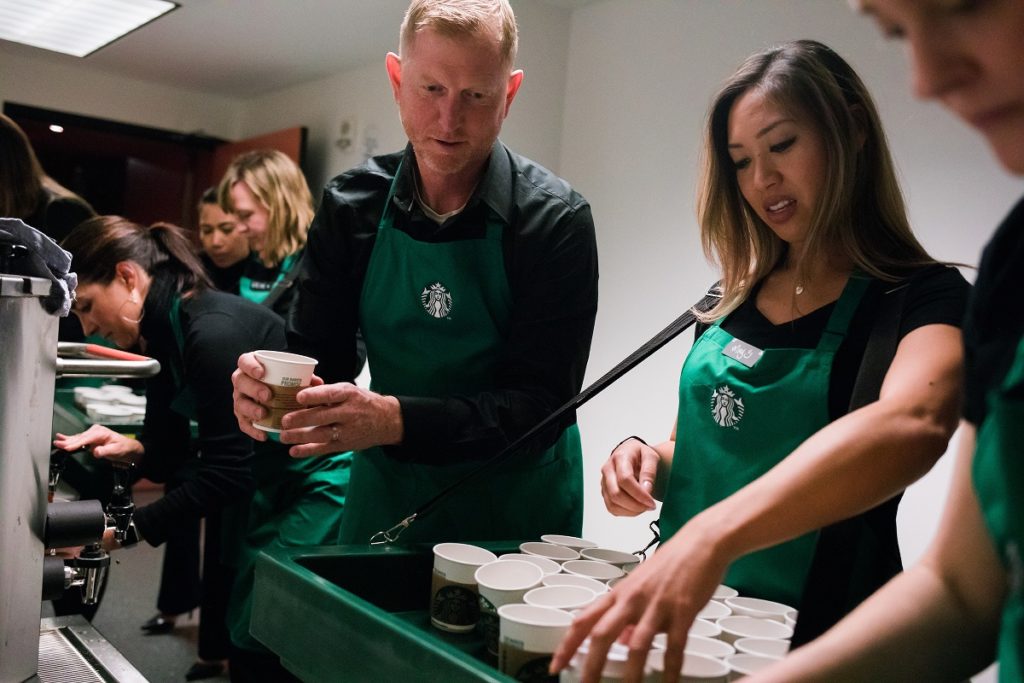 A company’s best practice standards are diminished when a white employees level of entitlement to voice their opinions on race.

At some point, one ought to think critically and act in a well-reasoned manner. There is more than enough shame, embarrassment and attitude adjustment that needs to go around for Starbucks and its associates. This brings us to the question: Would this situation have arisen had Starbucks provided an unconscious-bias training program to its 179,000 employees in the United States? Would a one-day training help Starbucks look into its spectrum of discriminatory practices? What about changing its policy which doesn’t allow the public to use restrooms without making a purchase? But before that, let’s look into the said benefit of a race training program.

A racial bias training can help navigate the tricky waters of discussing rate at the workplace in a meaningful and non-violent atmosphere. An organization’s commitment to helping their employees access and process their range of feelings when it comes to race – from confusion to complete obliviousness – is an important part of what makes a wholesome workplace culture. But at the same time, a company’s best practice standards are diminished when a white employees level of entitlement to voice their opinions on race.

This is why it is equally important to implement strong policies and ongoing training. One might say that a one-day race training program looks no different than a PR move. We are not looking at the bigger picture when we say that. What Starbucks is doing right now with the racial-bias training program is make us aware of the legacy situation the world is dealing with right now.

Along with the race training at Starbucks, they may need to rethink whether they are a point of purchase or an open table. After all, the employee in question was doing what she was told to do.

Priyansha Mistry
Currently editor at The HR Digest Magazine. She helps HR professionals identify issues with their talent management and employment law. | Priyansha tweets at @PriyanshaMistry
« What Can You Do When You Face Pregnancy Discrimination?
5 Quick Tips to Get Hired Fast »