The Idea behind WalMart’s Wage Increment

Unplanned working schedules are decried as the major issue in the retail industry as it makes it tough for workers with low-wage working on an hourly basis to plan for the school, second job, child care, or bill payments.

Not only Walmart, but various other leading retail giants, for instance, Victoria’s Secret, Abercrombie & Fitch, and Gap have also introduced changes in their policies for scheduling, along with providing wage increment.

For many years, the giant retailer, Walmart, has been under media and public scrutiny for price-cutting provisions affecting everyone from rival retailers to Walmart employees. The company had started forming a negative impact on the economy of America, according to critics. Some even dared to point out that Walmart is reaping high benefits from ‘behind the door‘ government subsidies by paying low.

The Walmart executives, although, defended their organization by calling the claims to be inaccurate. 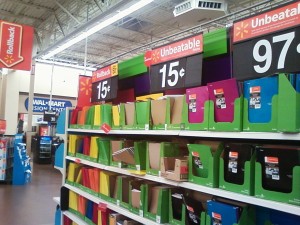 Well, inaccurate or not, this sudden wage increment reflects the retail giant’s clever strategy to enhance its brand image. Also, the increment may also be an output from the recent increase in competition from leading retailers like TJX and Target. The pay hike also arrives as the retailer has been often subjected to numerous activists protesting due to unkind workplace culture and low wages. It in an undeniable fact that strong increase in retail competition and growth of online retails led to the shutdown of 154 Walmart stores based in the US, which directly affected 10,000 Walmart employees in the US.

While it may not always work as the main motivator for workers, but wage increments certainly can boost the productivity level of employees. Since the announcement of increment, more than 16% increase is reported in the numbers of the Walmart stores rated ‘Friendly, clean, and fast’.

The quality of an organization’s workforce is considered as one of the major factors for success.

The sudden wage increment has brought a serious matter of concern among the Walmart consumers that it will eventually lead to increase in sales prices at the checkout. But that’s not the case since one of the key strategies drafted by Walmart includes ‘Rolling Back’ amount, there won’t be any such price hike on the sales. However, the wage increment is surely affecting the trading performance of the organization. Profits for Walmart are stagnant and the company faced its biggest low since 1988 by 10% drop in share rate.

There has not been any remarkable impact on the profit and sales of the company as of now, but higher wages have fixed one thing, limited positions. This ultimate move is yet another example in the controversial debate going on in America over ‘Minimum Wage’ and structures for ‘Employee Benefits’. Presidential election candidates of 2016 in the Democratic and Republican primaries are heating the seats talking about it during every important debate, as are the normal citizens online and on the street. It will take quite a considerable amount of time to measure the effect of such transformation and to check whether any other American organization follows the suit.

Diana Coker
Diana Coker is a staff writer at The HR Digest, based in New York. She also reports for brands like Technowize. Diana covers HR news, corporate culture, employee benefits, compensation, and leadership. She loves writing HR success stories of individuals who inspire the world. She’s keen on political science and entertains her readers by covering usual workplace tactics.
« How to Pick the Right Freelancer for your Work
What Made Mark Zuckerberg Lose His Cool? »