Having fully engaged workforce and strong corporate culture is the key secret to the Southwest Airlines success story. The Dallas, Texas-based airline (aka the world’s largest low-cost carrier) is proof that happy employees mean a successful company. As an airline with one of the most highly productive and motivated workforces, it’s management strategies have been widely replicated by many multinational companies on a global scale, with each of the copying firms deploying Southwest Airlines culture and strategies to not only distinguish themselves from their competitors but to gain competitive advantage.

Founded on March 15, 1967 (as Air Southwest) by Herbert Kelleher and Rollin King, Southwest Airlines began scheduling its first flights from Dallas Love Field – city-owned public airport, 4 years later – the same year it adopted the current name. In 1975, the airline company started its flight’s expansion and the results came to light in 1979 when it began flying to neighboring states. Within the last two decades, Southwest Airlines success story has become far more significant than that of any other firm in its service sector.

As of September 2018, the airline has 99 flight destinations spread across 11 countries, including the United States. During peak travel seasons, Southwest, which as of June 2018 has a total of 57,674 employees, operates over 4,000 departures every day using a fleet of 739 in-service airplanes. In 2017, Southwest Airlines had yearly revenue of US$ 21.171 billion and a total equity of US$ 10.430 billion.

While Southwest Airlines’ business model is conclusively far more important, its strong culture of hiring the right people is arguably the most valuable competitive advantage the company has. Known as one of the most used airlines for domestic flights by US citizens, the culture of Southwest Airlines demonstrates a people-oriented airline that depends on approachable and friendly employees to thrive. In each business model, the company hires individuals that must represent its branding message and carry a passion to help customers. Southwest maintains inflexible policies and hiring practices to ensure the right set of team members are continually hired.

Southwest has by far invested more in staff training and facilities for employee development within the last decade. The airline completed a new Training and Operational Support (TOPS) building, which has 392,000 square foot office and training facility in 2013. Two years ago, Southwest Airlines also opened a new training facility referred to as Wings, which has a 380,000 square foot development center known as Leadership Education and Aircrew Development (LEAD) Center. The new pilot training facility, opened April 3, 2018, can support 18 flight simulators with expansion provision to accommodate as much as 26 simulator bays. 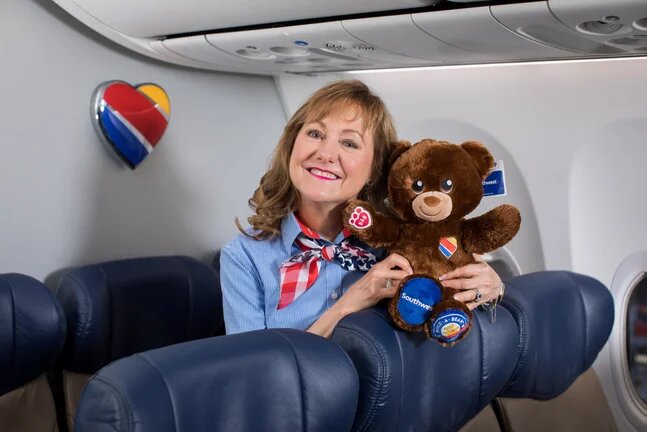 It’s easy to see why Southwest Airlines employees are exceptionally motivated. They are all shareholders and receive profit based on how much was realized for the year. No wonder! Southwest has been profitable for 44 years in a row. The airline’s founder Herb Kelleher in 1973 introduced a profit-sharing policy that enables the company to share annual profits to its employees. “Profit-sharing is an expense we want to be as big as possible so our people get a greater reward,” Kelleher said, according to Forbes.

Last year, the company announced it was sharing profits worth $586 million with its 54,000 employees. That’s an equivalent of 13.2% bonus on the average or extra six weeks’ play for each employee. A year earlier, Southwest Airlines disbursed record $620 million through the same policy.

It is difficult to ask why the company has extremely motivated and productive workforces. Southwest has found a way to pull of its employees together toward a common goal and a sense of fairness motivates them. That’s why stories about pilots’ efforts to cut back on fuel, flight attendants picking up trash, or gate agents following up borrowed staplers shouldn’t amaze anyone. They represent part of the HR success story at Southwest Airlines.

“Our people-first approach, which has guided our company since it was founded, means when our company does well, our people do really, really well,” said Southwest CEO Gary Kelly.“Our people work incredibly hard and deserve to share in Southwest’s success.”

The long success record at Southwest from its business model couldn’t spell the same with United Airlines which introduced the same employee ownership policy in 1995. The move sponsored immediate dividends, as the company’s stock soared to $4 billion but eventually collapsed due to various reasons.

This hands us a key lesson: the solution is not handing over equity to employees if they lack full knowledge of how to run the business. Southwest Airlines success story embodies well-staged business model supporting qualitative staff development and a highly sustainable hiring policy.

Anna Verasai
Anna Versai is a Team Writer at The HR Digest; she covers topics related to Recruitment, Workplace Culture, Interview Tips, Employee Benefits, HR News and HR Leadership. She also writes for Technowize, providing her views on the Upcoming Technology, Product Reviews, and the latest apps and softwares.
« The Different Types of Interviews That You Probably Didn’t Know About
An HR’s Guide: How to Manage Remote Employees? »