Once workplace automation takes over will life be full of luxuries or we will be faced with new dilemmas?

People have been worried about machines taking over jobs and lives for a long time. Mechanization has been taking place progressively through the ages with machines replacing humans in a lot of tasks. So are we automating ourselves out of jobs?

John Maynard Keynes warned in 1930 “about the new scourge of technological unemployment”, which he termed as “unemployment due to our discovery of means of economizing the use of labor outrunning the pace at which we can find new uses for labor.” In short, out jobbing ourselves.

Some researchers argue that innovative technologies could create more wealth, increase productivity and diverse jobs in the end by eliminating unpleasant rote work.

What workplace automation means for workers?

A recent McKinsey study estimated that as many as half of current jobs could be automated, and predicted 400 million jobs worldwide will be automated into nothingness by 2030. According to another study done in the United States, almost half of our jobs will be lost to automation. 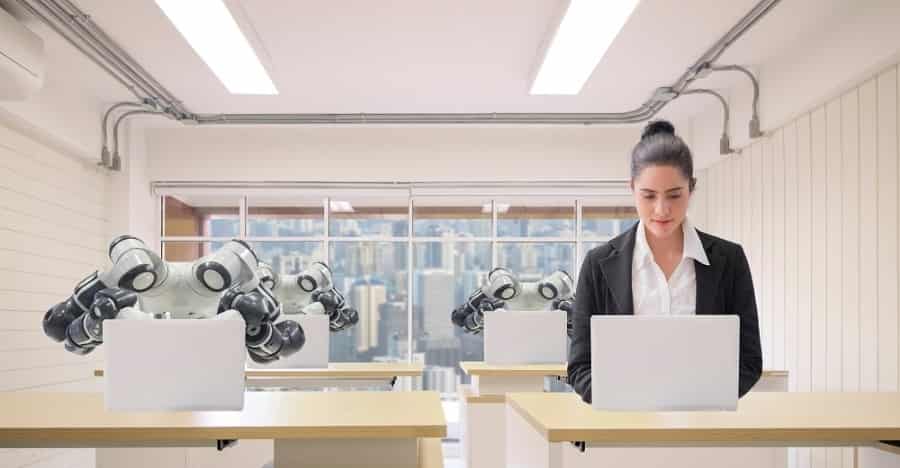 According to a study done in the United States, almost half of our jobs will be lost to automation.

Economists say that automation in companies has the potential to increase the existing societal inequalities as mostly lower-skilled jobs will be automated putting scores of the lower middle class and blue-collar people out of work.

The other impact of automation would be that highly skilled jobs will be controlled by a very few select people leading to a sharper divide in capital ownership. These highly skilled and wealthy people might form an autocracy that will control all important decisions concerning governance.

Also, the advent of Artificial Intelligence and big data and informational technology has thrown up another problem where a huge amount of data is generated about every aspect of our choices. There are concerns that whoever controls this data will control the way things happen. A truly Big Brother Orwellian future is predicted with higher automation in companies.

There are other concerns about the breach of privacy; biases that creep in just the way the data is collected where one feature, class, race, etc., will find more representation based on the biases of the inputer of data; ethics; and transparency depending on the company’s policies.

So how might we deal with this version of the future?

One answer is ensuring a universal basic income for everyone irrespective of their economic status.

To avoid concentration of power in some hands, anew collective ownership of capital assets based on labor and intellectual input will have to be worked out.

There’s also the question of what we would do without jobs once automation takes over. “Human beings tend not to do so well when they have nothing but time on their hands,” says Jeff Noonan, a professor of philosophy at Canada’s University of Windsor. But leisure studies expert Benjamin Hunnicut from the University of Iowa suggests work has become “an end in itself” and says we should embrace shorter hours.

Another thinking is that historically whenever greater mechanization has taken over jobs, mankind has learned new skills or upskilled himself to find suitable employment and be absorbed in the new environment.

The key is finding a balance in the new world. Finding greater leisure and a rewarding job. Striking that balance could be a major challenge in a more automated world.

A new social contract, education, opportunities for training and upskilling can mitigate the disruption caused by workplace automation.

Anna Verasai
Anna Versai is a Team Writer at The HR Digest; she covers topics related to Recruitment, Workplace Culture, Interview Tips, Employee Benefits, HR News and HR Leadership. She also writes for Technowize, providing her views on the Upcoming Technology, Product Reviews, and the latest apps and softwares.
« Employee benefits for Caregivers in workplaces
Finding work-life balance? Periodic in-office check-ins is the way to go! »