US Jobless claims dropped to 209,000 in the week ended July 6, which included the July 4 holiday, according to Labor Department data released Thursday. The closely watched claimant-count level of US unemployment declined to a three-month low last week, suggesting a robust labor market that could help support U.S. economic growth. US unemployment rate edged up to 3.7% but was still near 50-year lows. 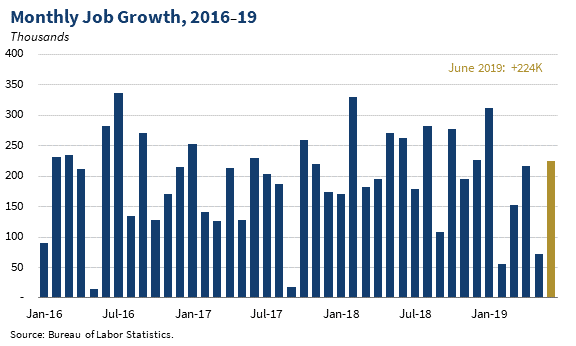 The economy created 224, 000 jobs in June, 60,000 more than predicted. The June jobs report said the US is entering the longest period of economic expansion on record, as the Federal Reserve decides whether it will cut its precautionary interest rate in late July. Some would argue that cutting now would limit the Federal Reserve’s ability to act if the economy weakens.

The upside of low US Jobless Claims

The US unemployment rate only counts people who are actively seeking work. As the U.S. economy grows, more people are returning to work and moving to better jobs.

The labor market remains tight for all industries and across all skill levels indicating that companies are having difficulty finding the right talent across a wide range of occupations. A survey from the National Federation of Independent Businesses found that 52 percent of businesses were unable to fill jobs. The good news is that 28% of businesses reported raising compensation in order to give bargaining power to talented workers.

A prosperous economy also translates to more opportunities for minorities and marginalized groups like single mothers and people with disabilities.

A tightening labor market is pushing small businesses to spend on training and development. It also indicates employers’ willingness to hire people with criminal records. On the same front, it reduces employers’ reluctance to engage in discrimination.